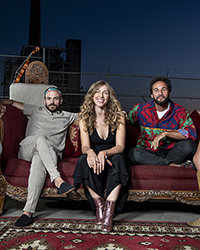 Lake Street Dive have partnered with PLUS1 so that $1 per ticket goes to supporting the Climate Justice Alliance and their work uniting frontline communities and organizations into a formidable force in the climate movement.

Since forming in 2004, Lake Street Dive have matched their sophisticated musicianship with a fearless refusal to limit their sound. As shown on their most recent album, 2021’s critically acclaimed “Obviously”, the Boston-bred band also possess a keen talent for combining socio-political commentary with immediately catchy pop gems. Over the years, they’ve captivated massive audiences at such esteemed festivals as Newport Folk Festival, Telluride Bluegrass Festival, and Toronto Jazz Festival, in addition to headlining tours all across the globe and sharing stages with acts like Brandi Carlile and Sheryl Crow. And through their fierce commitment to constantly elevating their artistry, Lake Street Dive have ultimately emerged as one of the most compelling voices in alternative music today, both reliably sublime and thrillingly unpredictable. With their current lineup comprised of founding members Rachael Price (vocals), Bridget Kearney (bass), and Michael Calabrese (drums)—as well as keyboardist/vocalist Akie Bermiss and touring guitarist James Cornelison—Lake Street Dive continue to create joyously soulful rock & roll with equal parts ingenuity, intelligence, and irresistible abandon.

In recent years, Lake Street Dive have brought even more boldness to their kaleidoscopic sound while deliberately expanding their songcraft. To that end, Obviously finds the band examining such complex matters as gender inequality (on “Being a Woman”) and the monumental challenges faced by younger generations (on “Making Do”), shaping each track with a profound intentionality and ineffable mastery of melody and groove—a process Price refers to as “putting these messages into three and a half minute snippets, dropping whatever truth we can and hoping it’s the type of thing that people want to ruminate on.” Made with producer Mike Elizondo (Fiona Apple, Mary J. Blige), the result is an endlessly illuminating body of work that’s earned praise from the likes of Rolling Stone (who noted that “at a moment when pop strives for lo-fi, solitary-world intimacy, the jazz-pop whatever band refuses to think small”).

Dance Alert! We never know when joyous dancing or standing may break out. We try to make it fun for everyone. If you are not a dancer and don't want to be caught behind one, try choosing seats in the mid-center or back sections.


*Plus applicable taxes and fees: