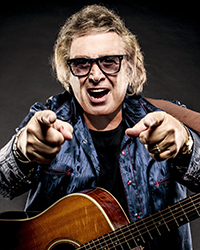 
Grammy Award Nominee, Songwriter Hall of Fame Member, and BBC Lifetime Achievement Award recipient Don Mclean is hitting the road to celebrate 50 years since the release of one of the most iconic songs and albums of all time. Since the eight-and-a-half-minute ballad “American Pie” hit number #1 on the billboard charts in 1971, the song has since been inducted into the Library of Congress’ National Recording Registry, named a top 5 song of the 20th Century by the Recording Industry of America, and inducted into the GRAMMY Hall of Fame. The 50th Anniversary American Pie Tour will see McLean entertain fans across North America as he performs songs from the iconic album and other fan-favorite hits. With 22 studio albums under his belt, numerous accolades, and mega-hit songs like "Vincent (Starry Starry Night) “And I Love You So,” “Castles in the Air,” and “Crying,” McLean has cemented himself as one of the most significant and influential performers of all time.