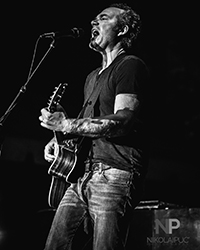 
Singer-songwriter John Ondrasik, better known as Five For Fighting, has spent the past decade creating deeply personal music that invokes the human spirit and provides listeners with an instant case of nostalgia. Over its storied career, the band has sold millions of albums and singles, including platinum-certified albums “American Town” and “The Battle For Everything.” Five For Fighting became a household name after the release of the worldwide hit single. “Superman.” The song was certified platinum, and went on to become an anthem for the heroes of 9-11 and a song of healing for the nation. Other notable tracks include certified double platinum “100 Years,” certified gold “Chances,” “Easy Tonight,” “World,” and “The Riddle.” Ondrasik’s music has been featured in 350 films, TV shows, and advertisements ranging from "The Blind Side" to "Hawaii Five-O." He has also written tunes for everyone from Josh Groban to The Backstreet Boys.

Five For Fighting will be joined by multi-platinum alternative rock band The Verve Pipe, best known for their songs “Photograph,” “Here,” “Happiness Is,” “Never Let You Down,” and their smash hit, “The Freshmen.” After nearly 30 years as a group, the band continues to deliver original music distinguished by innovative arrangements, soul-searching lyrics and layered vocals.