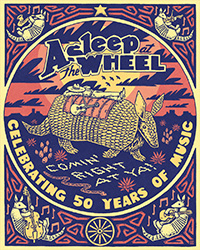 Grammy Award winning and Americana Music Association Lifetime Achievement Award recipients Asleep At The Wheel are hitting the road as they celebrate more than 50 years since their founding. Since the early 1970’s, front-man Ray Benson has led the group as they have traversed the globe as ambassadors of Western Swing music and have introduced its irresistible sound to generation after generation. Known for hits such as, “The Letter That Johnny Walker Read,” “Miles & Miles of Texas,” “San Antonio Rose,” and their cover of “Route 66,” the 10-time Grammy Award winners have earned 20 singles on the Billboard Country Charts and have released 20 studio albums including 1993’s critically acclaimed “A Tribute to the Music of Bob Wills,” 2007’s “Reinventing the Wheel,” and most recently 2021’s “Half a Hundred Years.”

While the band’s lineup has changed countless times over the years – more than 80 members have passed through their ranks – Ray Benson’s mission to preserve and revive Western Swing has never wavered. The merging of past and present is effortlessly woven throughout two of the band’s new releases. First, their Better Times EP compiles three new tracks: “All I’m Asking,” a rousing plea for a second chance; the hopeful title track, about getting back to life as it once was (namely, before the pandemic); and “Columbus Stockade Blues,” a traditional tune arranged in the spirit of Willie Nelson and Shirley Collie’s 1960s version. Asleep at the Wheel continues to represent an important cornerstone of American roots music, even though some of its members and audiences represent a new generation. That far-reaching appeal remains a testament to Benson’s initial vision.