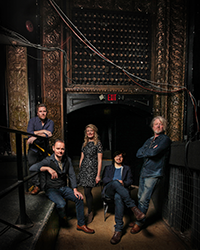 
Since their 1997 beginnings in Santa Monica, acclaimed multi-national Celtic juggernaut Gaelic Storm has risen from hometown pub performers to a world-famous touring and recording act that continues to grow stronger with each live performance. Led by original members Patrick Murphy and Steve Twigger, Gaelic Storm consistently travels the United States and internationally more than 200 days a year, and since their founding two decades ago have performed well over 2,000 shows, 12 of which have been on the Big Top stage. The band’s first major career breakthrough came with their appearance in the 1997 Blockbuster Film Titanic as the steerage band where they performed “Irish Party in Third Class.” Upon the film’s release, Gaelic Storm was embraced by audiences. With their energetic mix of Irish and Scottish traditional fare, drinking songs, and playful original material they developed a fanatic and well-diversified fan base. Country Music fans adore their storytelling, Bluegrass fans love the instrumentals, Celtic fans love their devotion to tradition, and rock fans simply relish the passion they have for their instruments.

Throughout their nearly 25 year career, Gaelic Storm has amassed more than 250 million streams across platforms and released 13 studio albums, with many rising to the Top 10 on The Billboard World charts including Bring Yer Wellies, What’s The Rumpus, and their most recent release Go Climb A Tree. In addition to Murphy and Twigger, the band features percussionist Ryan Lacey, Piper Peter Purvis, and Fiddle player Katie Grennan.