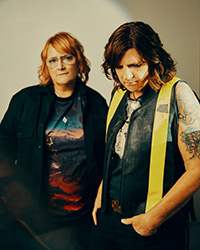 Sponsored By Motion To Go


Among the most enduring musical outfits to emerge from the late ‘80s female singer-songwriter scene Indigo Girls - the Grammy award-winning duo of Amy Ray and Emily Saliers - have established a devoted fan base throughout their multi-decade careers. Their self-titled debut album released in 1989, which featured hit singles “Closer to Fine’ and “Kid Fears,” turned the Indigo Girls into one of the most successful folk duos in history. While their two-women-with-guitars formula may not have been revolutionary on paper, Ray and Saliers' two distinct musical personalities and songwriting styles has made them a phenomenon, leading to the release of sixteen studio albums (seven gold, four platinum, and one double platinum) and over 15 million record sales.

Known for their political and social activism on issues such as LGBTQ and Native American rights, their music aims to radiate the sense of belonging and celebration. Their latest release, which marks their 16th studio album, Look Long is a stirring collection of songs that chronicle their personal upbringing with more specificity and focus than they have on any previous song-cycle. “When We Were Writers” recounts the flying sparks and passion Saliers felt as a young college student when the duo first started performing together. “Shit Kickin’” is a nuanced love letter to Ray’s Southern heritage. Produced by John Reynolds, this collection of songs have tender and revealing motion, while the album in its entirety serves as a refuge for those looking to escape the uncertain times we live in.