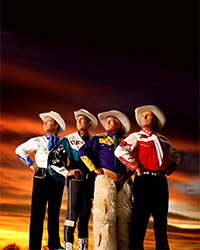 
Regarded as one of the “most historically significant acts in the history of American music” by Billboard magazine, the GRAMMY award-winning quartet of Ranger Doug, Woody Paul, Too Slim, and Joey the Cowpolka King, have kept the heritage of Western music alive as they have entertained audiences across the world for more than 40 years. Riders In The Sky kick off each performance with their trademark greeting, “Mighty fine and a great big Western ‘Howdy,’ all you buckaroos and buckarettes,” their live shows showcase each player’s masterful musicianship with an added dose of broad, quick-witted humor as they pay tribute to the classic cowboy songs of the 1930s and ‘40s.

Since their start in 1977, Riders In The Sky have released more than 40 albums, starred in the anthology television series “Tumbleweed Theater,” wrote and starred in their NPR syndicated radio program “Riders Radio Theater,” hosted their own children’s program on CBS, and have made more than 7,000 appearances all over the world. The Grand Ole Opry and Western Music Hall of Fame inductees have become well-known to new generations for their work with Disney & Pixar, notably their tune “Woody’s Roundup” from Toy Story 2 and the full-length GRAMMY award-winning companion albums for Toy Story 2 and Monsters, Inc.

What began as a celebration of classic Western Music and an evening of hilarity has become a career, and that career has become a legend, one which, 40 years on, shows no signs of stopping or even slowing down much. Don’t miss their return to Big Top Chautauqua this September!