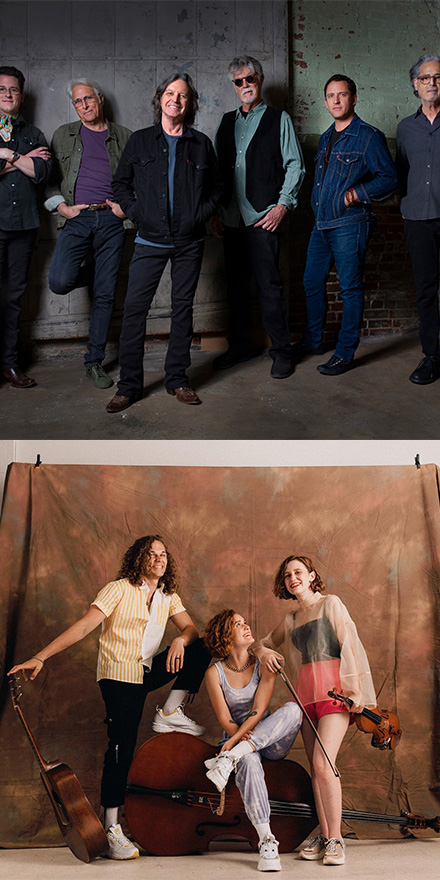 Founded as a small jug band in 1966, by 1969 Nitty Gritty Dirt Band had become a cornerstone of the burgeoning country-rock music scene. Their career breakthrough came in 1970 with the release of their album Uncle Charlie & His Dog Teddy, which saw the band embrace a straight, traditional country and bluegrass sound. The album included one of the band’s best-known hits, a cover version of Jerry Jeff Walker’s “Mr. Bojangles” which spent 36 weeks on the charts and rose to number one on the Billboard Hot 100 in 1971. The following year, the band released their seventh studio album, the critically acclaimed, Grammy-nominated, and certified platinum Will The Circle Be Unbroken. The record featured collaborations with numerous country, folk, and bluegrass legends like Earl Scruggs, Mother Maybelle Carter, Roy Acuff, Jimmy Martin, Doc Watson, and others. The critically acclaimed project has since been revered as a landmark recording in American music. Other notable hits include, “Am American Dream,” “Make a Little Magic,” Billboard No. 1 hit “Long Hard Road (The Share Cropper’s Dream),” Billboard No.1 hit “Modern Day Romance,” and Certified Platinum Billboard No. 1 hit “Fishin’ In the Dark.”

While many veteran bands trade on nostalgia, on replication of past glories, and on recycled emotions from younger, more carefree days, the Nitty Gritty Dirt Band trades on a mix of reimagined classics and compelling newer works. Throughout the group’s lifetime, personnel has changed, with each change resulting in positive steps forward, new ways of playing the old songs, and renewed enthusiasm for writing and recording fresh material.

The latest Dirt Band lineup is expanded to six members for the ﬁrst time since 1968. Today’s group consists of founding member Jeﬀ Hanna, harp master Jimmie Fadden (who joined in 1966), and soulful-voiced Bob Carpenter, who has more than 40 years of service in the ensemble. Those veterans are now joined by singer-songwriter-bass man Jim Photoglo, ﬁddle and mandolin wizard Ross Holmes, and Hanna’s son, the preternaturally talented singer and guitarist Jaime Hanna. Don’t miss their return to Big Top this summer!

Good Morning Bedlam
Good Morning Bedlam has become an innovative force in the midwest folk scene. Their shows are known for their contagious energy, with members careening about the stage. With tight soaring three part harmonies, and thumping kick-drum, they captivate their audience night after night. Every song is a unique twist on what is generally dubbed as folk music. “We want to surprise our audience from song to song.