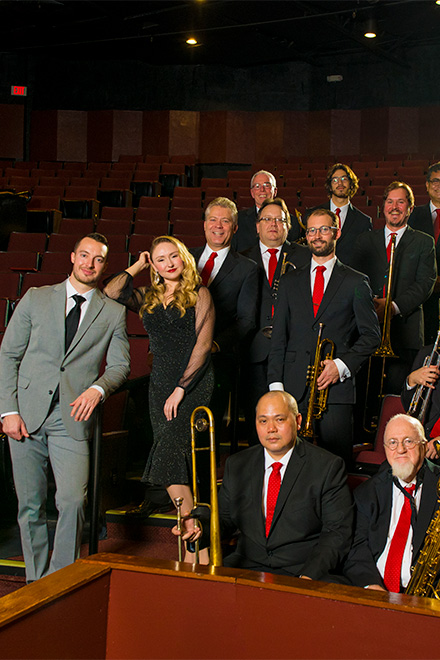 Considered to be one of the greatest bands of all time, the world-famous Glenn Miller Orchestra continues to keep Miller’s legendary jazzy sound alive onstage for old-time fans and new generations alike. Known for timeless classics like “In the Mood”, “Moonlight Serenade”, “Chattanooga Choo Choo”, and “Tuxedo Junction” the iconic bandleader's famous orchestra proves his unforgettable music is alive and well nearly 80 years after his passing.

While the first Glenn Miller Orchestra was a total and absolute economic failure, Miller was dedicated to his dreams and relentlessly worked until he succeeded. He launched his second band in March of 1938, and The Glenn Miller Orchestra became the most sought-after big band in the world. A matchless string of hit records, the constant impact of radio broadcasts and the drawing power at theaters, hotels and dance pavilion, built and sustained the momentum of popularity. After joining the army in 1942, the band was temporarily disbanded while Miller organized and led the famous Glenn Miller Army Air Force Band which traveled through Europe to entertain servicemen. After disappearing on a flight mission in 1944, the army declared Miller dead in 1945. Following the release of the movie The Glenn Miller Story in 1954, there was growing and renewed interest in Miller’s music legacy. Miller’s estate authorized the formation of the present Glenn Miller Orchestra under the direction of drummer Ray McKinley, and since 1956, the band has been touring consistently, playing an average of 300 live shows around the world every year.

Revered for its own unique and distinctive big band sound, The Glenn Miller Orchestra has always been very musical, disciplined, and visually entertaining. That sound is created by the clarinet holding the melodic line, doubled or coupled with the tenor sax playing the same notes; and the harmonies produced by three other saxophones, while growling trombones and wailing trumpets add their oo-ahs. Led by tenor saxophonist Erik Stabnau, the 18-member ensemble continue to play many of Miller’s original arrangements both from the civilian band and the AAFB libraries. The band also plays more modern selections arranged and performed in the Miller style and sound. Just as it was in Glenn’s day, the Glenn Miller Orchestra is still the most sought-after big band in the world.